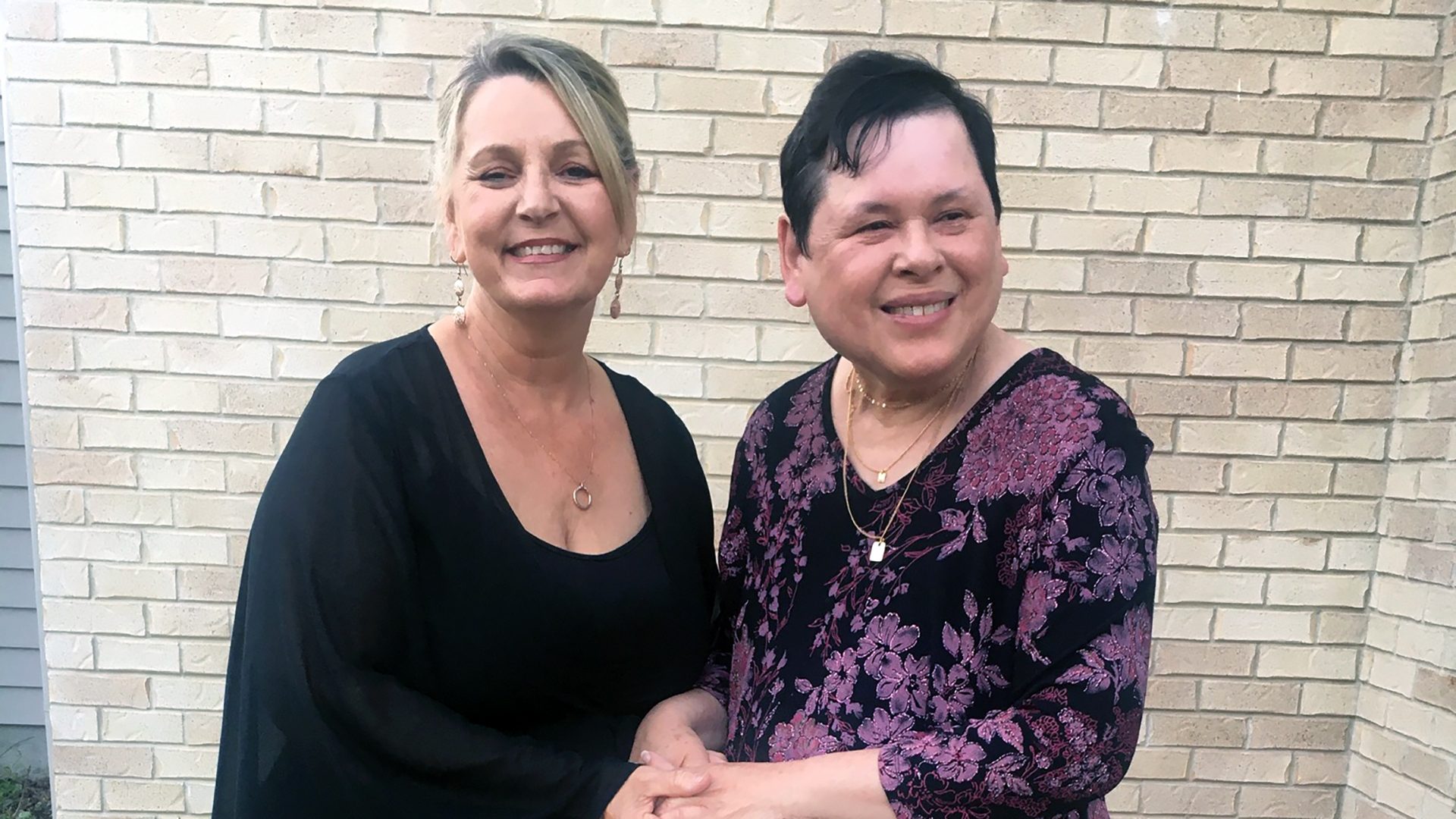 When two people who love musicals get together, the results can be pure magic. Bree Harvey is a Support Worker at Mercy Community. Bree works with people who have a disability, in our Individualised Supports program.

Bree first met Maureen in February 2021, in the supported living household Maureen calls home and shares with her four other housemates. Community participation is a big part of the lifestyle of participants, and it’s around the idea of getting out and about that Maureen’s goal started to take shape.

“When Maureen and I first met we discussed a lot of the things that Maureen enjoys such as favourite foods and movies, etc.” said Bree.

“One of the first things Maureen shared with me was that she loves musicals, something we both have in common. I also discovered very quickly that Maureen loves to count money. She always does her own balance check of her money each morning and night and even likes counting the household food money.”

One day when Bree and Maureen were having a coffee, Maureen expressed that she would love to see a show at the theatre, but couldn’t cover the cost of a ticket from her weekly budget.

“Maureen and I discussed how this could be accomplished,” said Bree. “I suggested that it might be something she could save towards.”

Bree planted the seed—one that would help Maureen build on her strengths and also empower her to be able to achieve future goals.

“I then sat down with Maureen and we looked at shows coming up and made a list of what she might like to see,” said Bree. “We looked at what tickets were within Maureen’s price range, and Maureen selected Charlie and the Chocolate Factory which was playing at QPAC.”

Learning how to save

Bree tells us how she and Maureen started the ball rolling.

“We got a separate savings tin and ledger so that Maureen could start saving towards her goal but still keep an accurate account of her money,” said Bree.

“Maureen decided to deposit the change from her Community Participation (CP) outings into her savings tin, instead of her regular tin. This way Maureen could still enjoy her outings but save at the same time.

“At first Maureen was a bit unsure of the whole process but at the end of each week as she counted her savings and watched her money grow, Maureen really warmed to the idea and I could see the excitement beginning to build,” said Bree.

Maureen had her goal firmly in mind when out and about. She’d choose to put extra money in her savings instead of buying something. For example, she’d have coffee for afternoon tea but forgo the usual biscuit or sweet treat.

Creating a vision board

“We also did up a savings chart vision board for Maureen to put up on her wall, helping her to keep account of her goal,” said Bree.

“Maureen helped me choose cardboard and decorations for her story board, and print out some pictures of Charlie and the Chocolate Factory to add to the board. We made a little set of steps and marked them with $10 increments so that Maureen could track her progress.

We put stars in each step that we filled up and Maureen’s excitement grew as each smaller goal/step was achieved.

Having that visual aid really helped keep Maureen to stay on track and helped her realise that she could—and would—achieve her goal,” said Bree.

Bree wanted to make sure Maureen’s night was memorable in every way, so dinner out was part of the plan. Before the event, Bree took Maureen into South Bank on the train, and they wandered along the dining strip, looking at menus. Maureen loves tacos and when she discovered a Mexican restaurant, the pair booked a table for the night of the show, allowing plenty of time to get to the theatre on time.

Once Maureen had saved enough money, Bree took her to Queensland Performing Arts Complex (QPAC) and Maureen purchased her tickets. It only took her from the 23 August to 13 September to achieve her savings goal which is absolutely amazing.

“Maureen was so proud of her accomplishment and could barely contain her excitement,” said Bree.

“I remember her saying to me ‘How did you know I could do it?’.”

“I told Maureen that I had faith in her and knew that she could achieve anything she set her mind to.

Maureen was so empowered, and it was so wonderful to bear witness to that!” said Bree.

‘How did you know I could do it?’  Maureen

Getting ready to go out

After buying the tickets, Bree and Maureen were all set for the big night.

“…but as us girls do, we decided to get a new hairdo before the night out,” said Bree.

Maureen chose a brand new look and said she felt like a million dollars.

“Maureen’s big night finally arrived, and I helped Maureen get ready for her outing by picking out her nicest clothes and making sure her hair looked beautiful,” said Bree.

With tickets in hand, off they went.

“It was like seeing Cinderella going off to the ball,” said Bree. “Maureen’s face was beaming with happiness!”

“We had a lovely meal at the Mexican restaurant, and Maureen was keen to get to the theatre.”

Charlie and the Chocolate Factory was a huge hit.

“Maureen loved the show, she sang along with the songs she remembered from her favourite childhood movie and clapped and laughed with delight as the Oompa Loompas appeared on stage,” said Bree.

“Maureen thoroughly enjoyed her big night out and I’m sure the memories will stay with her for years to come. I know they will for me!” said Bree.

If you’d like to find out more about our disability services, phone 1300 16 16 18 or email NDISinfo@mercycommunity.org.au

In the spirit of Reconciliation, Mercy Community acknowledges the traditional owners and country on whose lands we provide our services and recognises the cultural and spiritual connection of Aboriginal and Torres Strait Islander people earth, land and sea.

We wish to pay respects to the Elders past and present, as well as the emerging leaders, and the important role they share across these Mercy Community sites.