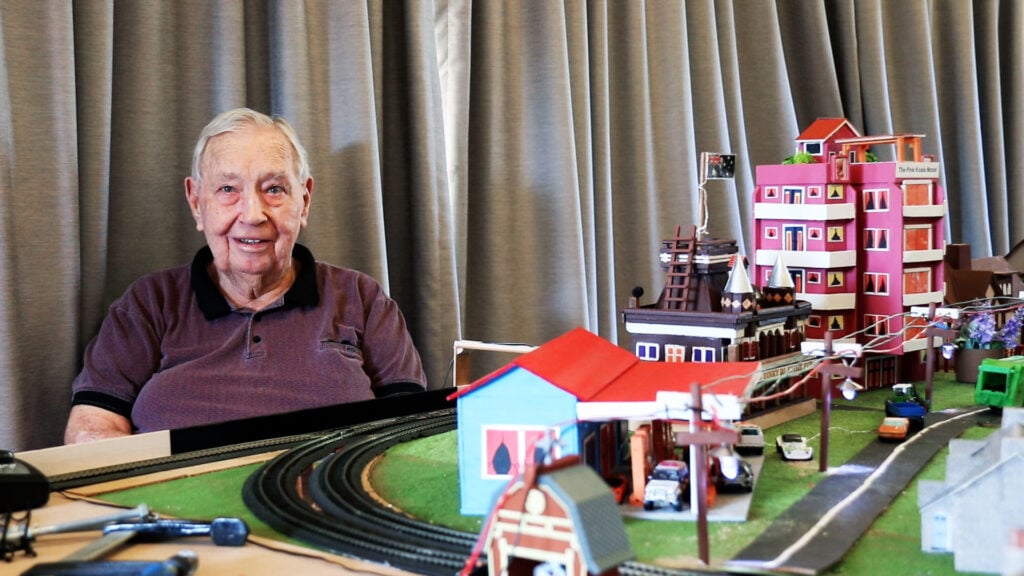 With a little help from fellow residents, Brian has built an entire model township from scratch complete with an operating train track, flower beds and even a local pub.

Before retiring, Brian was a high school principal and at 92-years-old he’s not looking to slow down anytime soon.

The grandfather and father of five spoke of how he admired the team at Mercy Community and their work to continuously improve the aged care residence, but also of how he wanted to contribute in his own way and founded a Men’s Club.

Model cars were donated by other residents.
The trains in action!

“I was hoping there would be others that would join in,” Brian says of model train project. “It’s nice for the men to get out and talk to each other.”

Almost everything, from the trees to the five story Pink Koala Motel, was created by Brian. The paper flowers were handmade by a group of ladies at the home while the toy cars were donated.

Brian has lived in Nudgee for almost 70 years. Prior to coming to Mercy, he had lived just down the road from the aged care residence in a house built by his grandfather just before the first World War.

“Before this was an aged care home, it used to be St Vincent’s Home for Children,” Brian says. “In those days I had sons playing footy we needed extra boys and I used to pick up a few of the boys here and take them off to footy.”

In his down time Brian used woodwork as a way to unwind during his career in Education.

“I ended up being a bit of a cabinet maker and I used to make cabinets for the family as they grew up and got married,” Brian says. “… This is something that is fairly natural for me.”

Brian’s affection for his family is clear, with two of the buildings in his model township being named after his sons; Tony’s Fabulous Fuelling Facility and Stevo’s Dinky Di Aussie Pub.

Brian began creating this project almost a year ago and is still keen to expand the already flourishing township.

In September Mercy Community began fundraising among their staff for Brian’s project. So far a total of $500 has been raised, all of which will go directly to Brian to expand his model train and township.

We’re excited to what else Brian will create and how other residents at Nudgee will contribute and get involved.

In the spirit of Reconciliation, Mercy Community acknowledges the traditional owners and country on whose lands we provide our services and recognises the cultural and spiritual connection of Aboriginal and Torres Strait Islander people earth, land and sea.

We wish to pay respects to the Elders past and present, as well as the emerging leaders, and the important role they share across these Mercy Community sites.