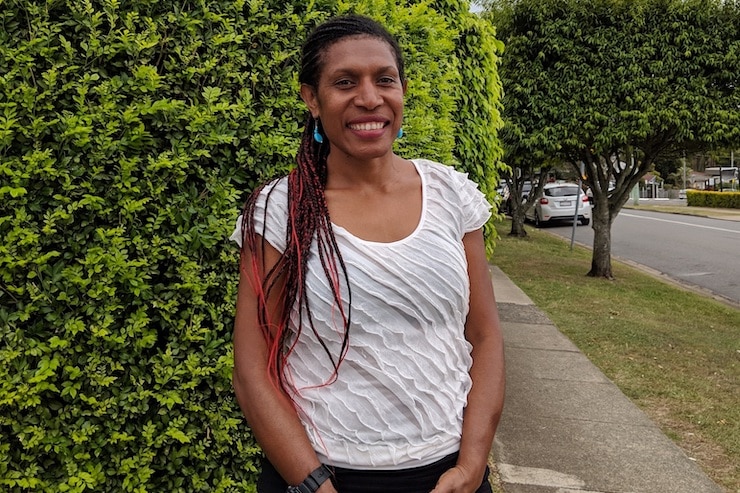 Brenda is a Mercy Community (MC) volunteer who spends a few hours each week with *Lorraine, a woman supported by MC. Brenda offers pastoral care and companionship to Lorraine every Sunday, where they pray together, play board games, watch documentaries and read Bible stories and books on Bible teachings. The two women also exchange stories about their lives, and offer support to one another during darker times.

Brenda is a spiritual woman who feels a calling to donate her time to those less fortunate than herself. Her grandfather, a Catholic missionary in Papua New Guinea (PNG), Brenda’s home country, inspired her from a very young age to complete missional work and do good where she could. Brenda has always been this way. She recalls getting food out of her mother’s pantry as a child and bringing it to older people in her neighbourhood. Growing up in a remote village in PNG, she was the favourite child amongst the older people. They would praise her for visiting them with food in her hands, and for fetching water from the nearby creek and collecting firewood. A friendly woman with a big smile, Brenda appears to be a woman with few worries, but there is more to Brenda than many people know.

Brenda had a hard 2018. A ‘cursed year,’ she calls it. She recalls being at South Bank in Brisbane as the clock struck midnight and the fireworks announced the beginning of 2019, and feeling relief that 2018 was finally behind her.

Brenda was in an abusive relationship with her partner in PNG. Brenda often arrived at work with bruises, black eyes, and once a broken arm. The women she worked with at the time regularly encouraged her to leave her partner, or to turn him in to the police. Attempts were made to seek police assistance but the Papua New Guinean police were not helpful. At the same time, Brenda had her traditional obligation to fulfil. Staying in the abusive relationship was tremendously hard for Brenda, as she tried to balance everyday life as well as consider whether her community would shun her for leaving him.

In 2018, Brenda’s work brought her to Brisbane for a time, and she and her partner were staying close to the city in an apartment block. One morning, Brenda asked her partner about his extra marital relationships, and her husband was not pleased. Brenda was working on her laptop when, out of nowhere, her partner took a swing at her. Shaken and stunned, Brenda got herself out of the apartment as quickly as she could, and made it down to the reception area. The staff member working at reception had Brenda hide in the back room, and called the police.

Brenda says that the violence shocked her, as she did not expect it to happen in Australia. She had grown used to her partner’s actions at home in PNG, but she did not expect him to hit her in Australia. It was being in Brisbane that gave Brenda the strength to leave him. She applied for a protection visa, a visa that Australia offers to people whose home country is not safe for them to return to, and she is currently awaiting a decision to be made on the application. Her partner, who is a permanent resident of Australia, continues to live in Cairns.

The protection visa means a lot to Brenda. She would not be safe in PNG due to the continuous domestic and family violence she endures, as there is no help available for such situations. Furthermore, traditionally speaking, she has brought shame to her family and her community in PNG by leaving her partner. Domestic and family violence is normalised in the Highlands region of PNG where Brenda comes from, and, as such, her ex-partner’s acts of violence are not seen as criminal. In their eyes, Brenda leaving the relationship is a more serious misdemeanour.

Due to not being able to travel back to her village in PNG, Brenda was also unable to be with her mother and older brother who were both hospitalised in the same week in August of 2018. Brenda’s mother had a stroke, and her brother’s health had been deteriorating. In the same week, here in Australia, Brenda went to church on Sunday and spent hours crying and praying for God’s strength. The following week, on Tuesday, her older brother passed away. The pain of not being with her sick mother to comfort her was devastating, yet, Brenda’s faith in God gave her strength to focus on her volunteer work.

Despite her difficult year, Brenda remains optimistic and keeps the importance of her missional work at the front of her mind. Brenda did go through a rough time but this did not deter her from her volunteering. Brenda loves spending time with Lorraine, and this year has developed a schedule of activities that they follow together. Brenda encourages many women around her to volunteer, as she has found it tremendously helpful for healing. Brenda knows that everyone has challenges in life, but also believes we have a responsibility to care for others in any small way possible. Brenda knows spending just a few hours with someone can make a significant difference mentally, physically, and spiritually.

Brenda says the time she spends with Lorraine brings her great comfort, and helps her put her troubles into perspective. Mercy Community is immensely proud to have Brenda on the team of fantastic volunteers. Brenda personifies many of the Mercy Community Values, which MC staff and volunteers strive to live by day to day. She has dealt with her hardships with great dignity. She shows mercy in her volunteer work with Mercy Community. Brenda inspires the empowerment of others by encouraging other women around her to volunteer their time to help others.

Thank you, Brenda, for selflessly giving your time to support Lorraine, and for making a world of difference in our Mercy Community.